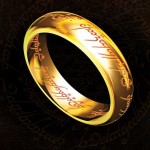 I’ll be the first to admit I’m not a fan of fantasy books.  I just don’t understand them.  I do have great respect and admiration for those who write them, though.  It takes great skills and imagination to create entire planets and characters that are not from our world.

But like millions I do know about the Lord of the Rings books by J. R. R. Tolkien.

But let me go back a bit.  The year was 2001 and it was the year the LOTR – Fellowship of the Ring movie was going to be released in theatres.

For the release of FOTR there was going to be an exhibit of the costumes and props from the movie at Casa Loma (a castle-like-house built in the early 19th century) in Toronto.

It was also the year I turned 23 (not a big milestone, I’ll admit) and it was on my birthday that my brother decided to take me to the exhibit.

My brother, his friend, and I took the subway on a Sunday morning to Casa Loma.  We were all excited. My brother and his friend were more so than I was.  They were both huge LOTR fans while I, being a history enthusiast, was happy just to see the castle.

We slowly made our way through the castle.  The props, sets, costumes, etc from the movie were scattered throughout the building.  We saw Bilbo Baggin’s home, the ring, the hobbit costumes, Gandalf’s hat, Legolas’s bow, and many more items that to name them would take too much space.

As we moved along I wanted to stop and admire the structure and history of Casa Loma but my brother advised me that we would do that after we had seen the LOTR exhibits.  This way we would have the rest of the day to do so.

The final exhibit was at the far end of the building, dubbed the stables, where, well, the horses used to be kept.

We moved through a narrow tunnel and made it to the end.  From there two short stairs zigzagged up.  We went up and began admiring the various props.  My brother’s friend began taking photos, which we had been doing throughout.  The camera belonged to my brother’s co-worker and it was an expensive model at that time.

Halfway through we were approached by a short, heavyset, miserable looking security guard who advised us not to take photos.  My brother and his friend protested that everyone else was taking photos too.  Why wasn’t he stopping them? But he wouldn’t listen and told us not to.

I wanted no part of it.  Remember, it was my birthday and I didn’t want any trouble.  My brother told me to wait downstairs, which I did.

Half an hour went by and no sign of either my brother or his friend.  I went back up the two sets of stairs and found them.  They had taken all the photos and still had the camera!  Now we could go and see Casa Loma, I thought.  But no.  My brother and his friend had other plans.

I begged them not to but they wouldn’t budge.

Again I went downstairs and waited for them.  I found a chair and sat facing the stairs.

Not five minutes had gone by when, from the second floor, my brother’s friend leaped over the railings and bounced to the first set of stairs.  He quickly disappeared down the narrow tunnel.

I jumped up, startled. My brother came rushing down the stairs and said, “Run!”

We bolted through the tunnel, pushing and shoving passed visitors.

We exited the entrance of Casa Loma, not before hearing another security guard’s radio crackle.

When we were a good distance away I finally asked what had happened.

After taking all the photos, my brother and his friend decided to take a photo of ‘the troll’.  They watched and followed him until he went and sat down on a chair in the corner.  That’s when my brother’s friend jumped in front him, aimed the camera and snapped his photo.

Naturally, the security guard went after them.

Outside, my brother and his friend celebrated.  They climbed the walls of Casa Loma and posed while I took their photo.  They had defeated the evil troll and were victorious.

I, on the other hand, did not celebrate. I never got the chance to see the castle like I had wanted to.

I still have the photos from that day when I turned 23; of the shields, swords, axes, etc from the movie.  I also have the photo taken by my brother’s friend, before he leaped from the second floor balcony.

The photo only shows the feet of the security guard.

Yes, I may not have seen Casa Loma entirely but I have seen the boots of ‘the troll’ of Casa Loma.