Confessions of a Nex Addict

To view a full version of the cover click here

Mystery and comedy collide when Jon Rupret, mild-mannered parking enforcement officer, is assigned by his precinct to save Toronto from radical criminals bent on developing black-market narcotics.

Also available in these On-line Bookstores

R.A.C.E. (Radical Association of Criminal Ethnicities) is a group on the verge of creating a new, highly addictive illegal drug, called Nex.

When several veteran officers are sidelined by corruption charges, an error in his police experience file qualifies parking officer Jon Rupret for membership in an elite squad—Operation Anti-R.A.C.E.—speedily set up to identify the criminals and stop the new drug before it can be sold on the street.

Jon is partnered with jaded detective Philip Beadsworth, who’s none too thrilled with the situation.

The story follows the criminals’ desperate attempts to bully innocent chemists into creating the ultimate drug, and the police, as they attempt to track them down.

R.A.C.E. is also a satirical and humorous look at the multicultural landscape of Toronto through Jon Rupret’s eyes.

I lifted my head from the pillow and squinted at the clock. It was time to get up. Five more minutes, I warned myself.

Twenty minutes later, groggy and bleary, I sat up on my bum, my feet dangled over the bed. I yawned and then yawned longer and wider.

I’m not a morning person.

In fact, I’m not even a night person.

Wrap and seal me in a coffin and leave me alone; that’s what I’m talking about. And no need to dig me up, as I would still be sleeping. But, like three million others in Toronto, I am forced to go to work.

I rubbed my belly. It was soft and natural. I once dreamed of having six-pack abs. It turned into a nightmare when I realized I had to actually do something. I was able to manage a two-and-a-half-pack. No more than that.

I pulled myself up on my feet. I felt along the walls and found my oasis: the bathroom. I finished my task and then moved to the kitchen, following my morning routine. A sweet smell seeped into my nostrils. My state-of-the-art coffee maker had spurted the last drop twenty minutes ago.

I grabbed my favorite cup, a picture of a mouse snoozing in bed, and filled it with the dark liquid.

I strolled to the second-floor balcony and inhaled the morning air. It smelled of…um…let’s see…well, it just smelled.

Below, Gerrard Street bustled with the early morning commute. Cars, minivans, and SUVs maneuvered around the white-and-red streetcars, afraid of getting stuck behind one.

Across, a brown tow truck parked in front of a gray Honda Civic. The Civic had already been tagged; a yellow ticket flapped underneath the windshield wiper. The driver emerged from his truck and swiftly began securing the vehicle.

It was the most beautiful sight in the world. Justice was being done right before my eyes. At this moment I could have shed a tear or two, but I wasn’t.

The name on my Toronto Parking Enforcement badge reads: Jonathan Rupret—not Rupert—but Rupret. If there’s ever any confusion, always remember, R before the E. Jon Rupret is my name, parking tickets is my game.

I had arrived from Guelph two years ago, as a mild-mannered college graduate. Now, I was a superhero in a parking enforcement uniform.

As I am an only child—with no siblings and not many friends—my Mom wasn’t too happy with me coming here. She thought I’d be lonely. A superhero was never lonely. His friend was his duty and my duty was to keep the parking in Toronto efficient.

The Civic was now secured.

“Keep up the good work,” I yelled across, saluting with my cup.

The tow-truck driver waved back, approvingly. Two law enforcers sharing a Kodak moment; it was priceless.

I have to say I cannot stand violators. They never seem to understand that the roads are for everyone. There are city-parking laws and they must be enforced.

Obviously, the owner of this Civic had no regard for the law. Parking wherever and whenever he wanted. He probably even thought he was above the law. While everyone else got up early to move their cars, he could sleep in and not worry. That crook!

The tow-truck driver was inside his truck and was now easing it into the road. The Civic trailed behind.

I took a sip of my coffee. My senses flooded back. Everything seemed much, much clearer now.

“Qureshi has a lovely, formal style, very similar to that of Alexander McCall Smith… [R.A.C.E.] is a nice romp.”

-The Globe and Mail

“Qureshi…already has a knack for absurdist humour and wry observation after just one novel.”

“Fun and fast-moving…spunky reluctant hero…we still manage to cheer on Rupret as narc in much the same way we cheer Peter Sellers as Insp. Clousseau…a laudable first effort.”

(ten humorous ways to save money by the hero of R.A.C.E.)

Confessions of a Nex addict

(comments by a character from R.A.C.E.)

I am not important. I am just the short skinny guy. But I was the first to have Nex. Yeah. I was number one. Me. Not nobody else. But me. They gave it to me. Yes they did. One tablet. One tiny tablet. I put it on my tongue. Just like they told me. I made no fuss. No, no fuss. I cleaned my hand too—just like they told me. I wiped it clean. They gave it to me. I put it on my tongue. I showed it to them too. I wanted my hundred bucks. That was the deal. One hundred bucks for one tablet. So I was real good. Wanted to make them happy. Then the tablet disappeared on my tongue. It was gone. Vanished. Nothin’ happened. I got worried. Maybe I didn’t do a good job. Maybe I didn’t put it right. Maybe I swallowed the thing. Then my chest tightened. I stopped breathin’. It felt like it was gonna explode. Everything was gonna come out. My heart my guts…everything. My eyes were so tight I thought my head was gonna blow up. My body was so stiff I thought I was gonna die. Then…then it went away. Everything disappeared. Suddenly I was free. No pain. No worry. No trouble. Nothing. I was flying. I was relaxed. I was happy. I opened my eyes. I was smiling. They gave me my hundred. I begged them to give me another tablet. I did a good job. I deserved one more. They gave it to me. They liked what I did for them. I tried it. It felt great. Now I want more. I am gonna take my hundred and go get me some more Nex.

A R.A.C.E bookmark that you can print at home. 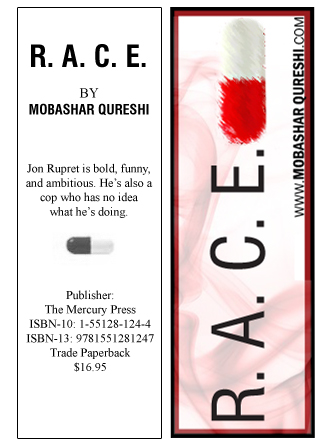