What’s so interesting is after narrowing it down there are still half a million sites that purport to teach you how to write that bestseller.

I find this both fascinating and depressing. Fascinating because there are so many individuals and companies out there who are in the business of teaching other writers how to write that book that’ll make the writer rich and famous. Depressing because there are so many writers who believe that if they read these ‘secrets’ they’ll achieve that fame and fortune. Now what these writers don’t understand is if these people did know how to write that bestseller they would be writing them instead of talking about how to write them.

Yes, there are those that have gotten lucky. They wrote that one book that caught fire and sold a gazillion copies, but this is rare. You have a better chance of winning the lottery.

My high school economics teacher always used to say: there is no such thing as a free lunch. Someone is paying for what you got for free, and they want something back in return. The advice you think you are getting for a small price (perhaps the cover price of the book) so that you can achieve that literary stardom, well, let me tell you, if they really knew they wouldn’t tell you and not for that price.

Now, I’m not a bestselling author, far from it, but if you look at the New York Times Bestseller list or any other list you won’t find those writers with books on how to write bestselling books. Instead, they are plugging away—day in and day out, in sickness and in health, in good times and bad—on their craft. Their only objective is to tell a good story.

Hopefully the really good ones achieve mass success but really bad ones have achieved it too. There is no one way of achieving it. I have read great books by unknown writers and really bad books by famous writers. You can call it luck or you can call it something else.

I am not going to give any advice—I wouldn’t know where to begin. I do know, though, that writing is hard—it is almost always a labour of love. But there is nothing more satisfying than finally finishing something that you have spent countless days, months, even years working on. If there is one thing I can leave with it would be this: writers write, plain and simple.

This reminds me of a scene from the movie, The Good, the Bad, and the Ugly. Tuco Ramirez (The Ugly) is taking a bubble bath when a One Armed Man enters the room and aims his gun at him.

The One Armed Man says, “I’ve been looking for you for 8 months. Whenever I should have had a gun in my right hand, I thought of you. Now I find you in exactly the position that suits me. I had lots of time to learn to shoot with my left.”

Tuco kills him with the gun he has hidden in the foam.

Tuco then gets up and says, “When you have to shoot, shoot, don’t talk.” 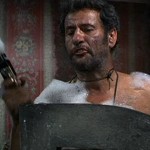